Will Robots & AI be Running Your Warehouse by 2020?

Will Robots & AI be Running Your Warehouse by 2020?

The Next Big Evolution is in Robotics and Artificial Intelligence

I’ve seen a lot of technological changes since I started working in the mid-90’s. Email started to become popular, the web around the same time. I remember the old Motorola Brick cellular phone with the big battery, 35mm cameras and the excitement of collecting photographs after getting them processed. The wow factor of the first time I saw an instamatic camera. Now all this technology, and more, is on the mobile phone in your pocket.

Advances in technology occur quickly. The next big evolution is in robotics and artificial intelligence, or put another way, the part of the economy where machines and computers interact only with other machines and computers. The term Second Economy has been coined. Economist Brian Arthur of the Santa Fe Institute predicts that by 2025, the second economy may be as large worldwide as the First Economy with up to 100 million workers being displaced.

This revolution has already started. Self-checkout tills at supermarkets, credit card payment for fuel, autonomous cars (twenty-two U.S. states have enacted legislation related to autonomous vehicles – it was four a year ago). McDonalds now have self-service screens for pay-by-card ordering and receipt printing. And, in some U.S. states there are 2.5 robots per 1,000 workers (Mark Muro, 2015). And now there are even left and right-handed picking robots for more efficient bin filling. Rise of the machines indeed.

Only a couple of decades ago, 90% of robots were used in car manufacturing, typically on assembly lines doing a variety of repetitive tasks. The number of robots has grown exponentially but more recently around half are in automobile plants. The other half have spread to a wide range of factories, laboratories, warehouses, energy plants, hospitals, and other industries.

Keeping customers satisfied depends on fulfillment capabilities and forward-thinking warehouse operators realising their processes are a critical element in the supply chain. With new sales channels constantly emerging, customer expectations are changing. Social media, eCommerce and multichannel customers have more price and product choice, and delivery methods than ever. Combining distribution and fulfillment operations into a one facility has become the holy grail in the supply chain network, as these allow a single location to stock a vast number of products and to service multiple channels. 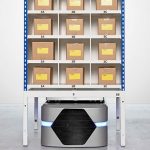 One way to speed up the warehouse picking and packing process is to reduce the number of miles walked by staff as they look for items on shelves. They call this Goods-to-Person, or the less PC, Goods-to-Man. Online grocery retailer Ocado has developed its Smart Platform system where robots bring the shelf stacks to the workers, who pick out the right products and package them up to be sent out.

These robots travel miles a day at speeds faster than a human can walk. No longer are the shelf and stacking systems static and inefficiently used. Ocado is also considering innovations like the application of Swarm Robotics technology. This allows multiple robots to communicate with each other to complete a common task, ideal for complex orders like the weekly grocery shop.

“Now that we are all confident that eCommerce is here to stay, organisations are beginning to recognise the need to automate and we will see the implementation of new technologies accelerate over the coming years.”
Alex MacPherson, solution consultant manager, Manhattan Associates

By summer 2017, Amazon had introduced Amazon Robotics systems into three of its 16 UK warehouses with plans to extend into another three. Robots slide under a tower of shelves where products are stowed, lift it and move it through the fulfilment centre. They save space, allowing for 50 per cent more items to be stowed per square foot. The aim is to increase speed of delivery while enabling greater selection.

Logistics business DHL has carried out a pilot project applying Vision Picking technology using smart glasses in a warehouse in the Netherlands as a first step in their augmented reality journey. This hands-free and paperless order picking approach is designed to significantly reduced errors. Read more about DHL and augmented reality here. 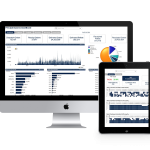 Principal Logistics Technologies have been designing innovative warehouse management software technology and solutions for over 25 years. We’ve worked with EiraTech on a 500Kg payload robot which is perfectly designed for picking operations, like Amazon, applying the goods-to-person approach I mentioned earlier whereby the product is brought on a shelf to a packing station. Our new development however is the evolution of robots that are capable of lifting 1000Kgs. The concept will involve full pallet movements within a standard warehouse layout. The robots will work in conjunction with existing manned reach and man-up trucks. We are excited about this project given that robots can work faster, in all temperatures, without rest periods barring brief charging periods, and they are more accurate and operate 24x7x365. Who wouldn’t be excited about that? 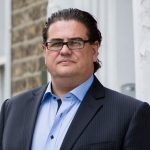 We love to find clever solutions that improve on our client’s operations and ROI. If you’d like to discuss an initial trial, or are experiencing Warehousing or Supply Chain operation issues and bottlenecks – or just need improvements to stay ahead of the competition – then contact me today.

This website uses cookies to improve your experience while you navigate through the website. Out of these, the cookies that are categorized as necessary are stored on your browser as they are essential for the working of basic functionalities of the website. We also use third-party cookies that help us analyze and understand how you use this website. These cookies will be stored in your browser only with your consent. You also have the option to opt-out of these cookies. But opting out of some of these cookies may affect your browsing experience.
Necessary Always Enabled
Necessary cookies are absolutely essential for the website to function properly. This category only includes cookies that ensures basic functionalities and security features of the website. These cookies do not store any personal information.
Non-necessary
Any cookies that may not be particularly necessary for the website to function and is used specifically to collect user personal data via analytics, ads, other embedded contents are termed as non-necessary cookies. It is mandatory to procure user consent prior to running these cookies on your website.
SAVE & ACCEPT